The project chosen by Scott Brand, Sean Gabriel, Michael Hernandez, Jessie Grimm, Brian Crawford and Paul Jones was the Mathematical Modeling of Fracking Chemical Dispersion in Groundwater. A major concern in finding fuel sources in shale deposits underground is the brine solution, used in fracking and containing many harmful chemicals, dispersing into the groundwater above these shale deposits.  If it could be determined how the brine solution ends up getting into the groundwater, then maybe this water pollution could be prevented altogether or another way to break up the shale could be found. 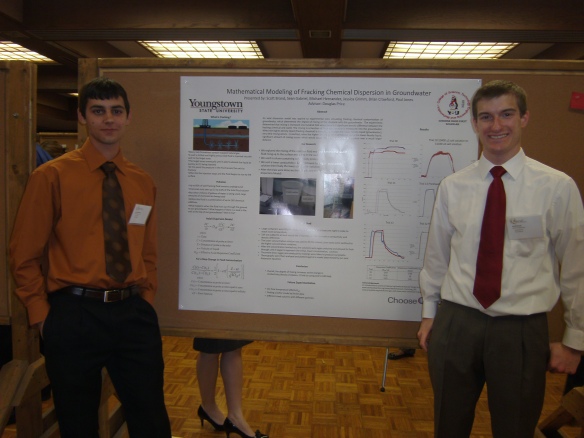 Pictured are (left) Brian Crawford and (right) Scott Brand in front of their poster during the Quest presentation.

To model the ground, semi-permeable marbles in a clear plastic column were used; and to model the brine solution, saltwater solutions of different conductivities were created (it was assumed that the chemicals moved with the salt).  Water and the different salt solutions were pumped up through the vertical column, and the conductivity was measured on a computer program called LoggerPro by conductivity probes inserted into the side of the column.  From the data and using an equation model, it could be determined whether the solutions were traveling in plug-flow manner–one solution right after the other–or mixing–where the two solutions mix and do not flow one solution after the other–by finding the diffusivity of the one solution into the other.  It was found that plug-flow dominated as the conductivity increased, whereas mixing occurred when switching back to a lower conductive solution.  In fact, the difference in diffusivity from switching from pure water to a salt solution and from a salt solution to pure water again was a factor of 100.  Future studies could analyze exactly what factor is causing this to occur and what is the best way to prevent this mixing.

1 thought on “Mathematical Modeling of Fracking Chemical Dispersion in Groundwater”